Want to buy Apple iPad 128GB? Apple today increased the iPad storage from 64GB to 128GB by adding  a new model to its iPad lineup. The new 128GB iPad with retina display will be available in both Wi-Fi and Wi-Fi + Cellular models and will provide twice the storage capacity! 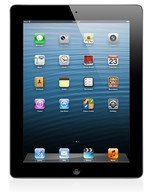 As the ever improving iPad camera continues to store more HD photos, and HD videos, and as the iPad continues to replace netbooks and traditional computers –  people continue to store large amounts of data on the iPad, and while computers still come loaded with 500GB+ hard disk drives, the iPad was still stuck at 64GB with no way to increase the inbuilt storage.

Its not available for sale yet. The new iPad 128GB will start selling on 5 February 2013 in both black and white colors from all Apple stores, Apple online store and authorized retail stores.  The Wifi model will cost $799  and Wi-Fi + Cellular model will cost $929. If you compare the rates with the 64GB models, it means just by paying $100 extra you can get a 128GB model instead of 64GB!