Now Flickr is supporting a new license called United States Government Work, which labels most Obama photos from the White House Flickr photostream. So what prompted the release of this new license? 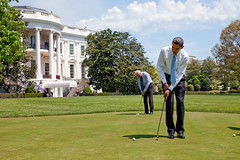 Most photos on Flickr photos sharing site are labeled “All rights reserved” or bear Creative Commons licenses with “Some Rights Reserved“, should image owners decide to share them with the world. Recently the White House launched the Official White House Photostream on Flickr, with some amazing insider photos by their official photographerPete Souza and released photos under a CC license.

But Creative Commons under whose license the photos were released, wondered if the photos were in the public domain and can be used without attribution as the photos were works created by the federal government and not entitled to copyright protection.

The Electronic Frontier Foundation points to Flickr photostreams of other public institutions like Smithsonian and Library of Congress which are are labeled with “No known copyright restrictions” explaining that the photo is either public domain or is owned by an institution that is not exercising control over the image.

Now Wired noticed that the White House Licenses changed and Flickr introduced a new license called the United States Government Work which links to theCopyright Law of the United States of America and Related Laws Contained in Title 17 of the United States Code. So you can go through the long document and read the fine print should you decide to use these amazing never seen before photos.

Fresh tips and tricks in your inbox every week. No spam. Unsubscribe anytime.