How did Google clear weeds from their Mountain View headquarters? They hired Goats to do it, and it seems they did a better job than a lawn mover and was a greener option too. 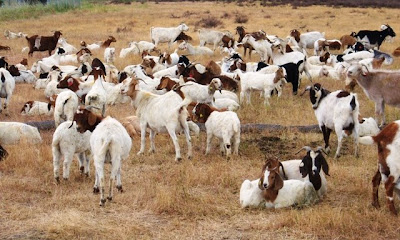 Adopting the low carbon approach this year, Google decided to drop noisy lawn mowers powered by polluting gasoline and decided to rent goats from California Grazing for the job, where a herder brings about 200 goats, which spend a week eating the grass!

“Managed goat grazing service is exceptionally cost effective, particularly for large acreages and difficult terrain. It also has been proven to efficiently handle areas that are inaccessible or difficult to manage with mowers, areas where burns are inadvisable and areas where application of herbicides is not appropriate”

So was it cheaper? Actually it costs them about the same as mowing!

Techcrunch guys pinged PETA (People for the Ethical Treatment of Animals) who responded with “concerns about how the goats may be transported, whether they are provided with access to shelter during storms and shade as well as water during hot weather, where they are housed when they aren’t working…”

and Google also responded to their concerns that? “lawn-mowing goats are not, of course, full-time Google employees – but we would certainly respond directly to any concerns about their treatment. I can confirm that during their time in Mountain View, like other Google employees, each goat is entitled to a free organic lunch.”

Then Techcrunch guys actually visited the site and found a? few hundred goats there, busy munching away.

Google has always been concerned for a greener earth and has been part of several initiatives like generating solar electricity at Googleplex, turning off lights and saving energy at data centers.

A2 HOSTING - Notice how fast our site loads? 66% off Black Friday Sale!

SEMRUSH SEO - The only SEO tool we use. Get Free Trial today.