Where does the Twitter web traffic come from? The US being the major source of web traffic to twitter does not surprise me, but can you guess the second country which sends huge site traffic to Twitter?

I saw this Twitter web traffic chart which was analyzed by the Twitter guys themselves and shows the top ten non-US traffic sources. 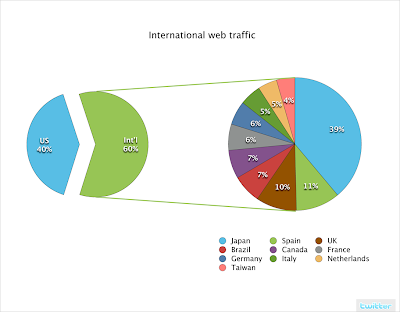 After the US sends in 40% of US traffic, the statistics of the remaining 60% non-US traffic is interesting. Of this 60% – Japan accounts for 39% of it (Surprised? don’t be. Remember that Japanese is most common blogging language), followed by 13% for Italy and 10% for UK and 7% for Canada and Brazil (Brazilians love Orkut too). Where are the Indians? There are lots of Indian Twitterers out there…

However, they clarify that this is just web traffic and does not include any of the other popular ways that people use Twitter like SMS, instant messaging, m.twitter.com, and API devices such as Twitterrific.